There are many choices out there for hardware crypto wallets. I have chosen to review 2 of the top wallets available. Each have their own chrome apps, the Ledger uses Ledger Manager, and the Keepkey uses Keepkey Client. We’ll make a complete comparison of the Ledger vs Keepkey in some of the key areas. Keep in mind hardware wallets, in general, are the safest form of protection for your cryptocurrencies out there. Both the Ledger and the Keepkey are excellent wallets that will keep your cryptocurrencies safe, but even a wallet can’t protect against negligence. So, don’t advertise that you own crypto and don’t hold your hardware wallets in any easily accessible locations. Make sure that the pin code for each is unknown by others and don’t use any hardware wallet in a public location.

I would suggest using the hardware wallets and accessing any crypto related sources such as a broker on a clean computer that you use strictly for cryptocurrency access. The wallets will be safe regardless of whether you use this secure computer or not, but other sources of crypto may not be. This source includes online brokers, online wallets such as Exodus or even stores accepting bitcoin. Use a VPN when online and accessing crypto related platforms.

Just a quick lesson as to what a hardware wallet does:

The Keepkey is one of the sharpest looking hard wallets of all. It’s broad face, and clear digital interface makes it one of my favorites. There’s no difficulty seeing what exactly transpires on the interface compared to its smaller competitors. 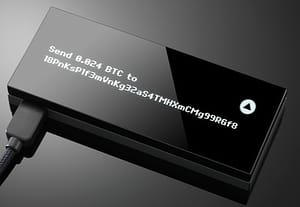 It’s designed similar to the other major hardware wallets; you have first to store a chrome extension on your chrome browser. This extension allows you to initialize and send transactions. You’re first promoted to set up a pin number, and then you’re given, for one time only, your recovery phrases. These phrases are essential since they allow you to reset your device or set up a new machine so to reaccess your keys. 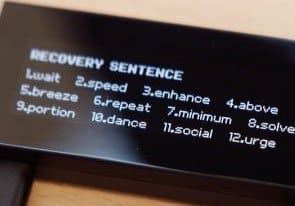 These keys are well protected by the Keepkey device, and you can write down the phrases that help access your private keys as a backup. You should have at least two copies of this phrase and secure them in a very secure place. These phrases should be shown to no one else since they give complete access to the private keys. The private keys control everything and are what allows you to transfer your cryptocurrency to other wallets.

I haven’t found out as much about the Keepkey’s security as I’d like, but I’ll keep this updated as I learn more. The Keepkey is well respected and considered one of the most highly secured wallets out there. It has a plethora of security features.

The Keepkey uses STM32F205RGT6 chip from STMicroelectronics. It’s been certified in such respected publications as FIPS PUB 140-2, and FIPS PUB 180-2.

The chip uses limited rules to communicate with computers, and therefore your private keys needed to access your crypto are never attainable by hackers.

The Ledger is a sleeker version of the 2 wallets. It’s about 1/5 the size of the Keepkey and looks more like a USB stick than the device for storing many of the renown cryptocurrencies. It has a smaller screen and is more difficult to view than the Keepkey. Whereas the Keepkey has one button, the ledger has two. It is still relatively easy to use, also depending on a chrome app or various other apps such as myetherwallet for access.

The Ledger Nano S is protected similarly as the Keepkey. When the Ledger is first accessed it displays the seed phrases that allow you to reset the wallet just as the Keepkey does. These seed expressions should be written down and stored as they allow a complete restoration of the wallet or permit the same wallet to open on a second Ledger. The Ledger and Keepkey are called hardware wallets but simply enable access to the wallet stored on the blockchain.

If you lose the seeds, it can be game over. Your “coins” will be lost in the crypto land forever.

The Ledger Nano S features the latest up to date security. It features a secure chip with its own proprietary operating system. This offers both ease of use and peace of mind. The chip included is a smart chip with secure characteristics, not a simple chip like some other hardware wallets. This is the same type of chip used in securing biometric data, passports or credits cards.

This secure chip is tamper proof capable of hosting many applications and storing private and cryptographic information. The Ledger Blue wallet hosts even more applications. The Ledger Nano is extremely hard to hack, but the more simple chips mentioned above are considerably easier to illicitly access.

The Ledger’s secure chips are checked by certified independent experts such as Common Criteria and EMVCo to further guarantee quality and trustworthiness.

Ledger itself created its own operating system called BOLOS specifically to support crypto assets. This is continually improved upon with regular updates, again for your peace of mind.

Ledger vs Keepkey: a Comparison

I’ve already mentioned some differences between the Keepkey and the Ledger, but I would like to summarize these in some charts. First of all the prices are close and change over time. Presently the Keepkey costs $128, and the Ledger costs $99. Again, the Keepkey stores several cryptos but the Ledger stores so many more. This selection may change with time since the two wallets are always being updated.

In terms of security, they’re both considered some of the best out there. I will explore the finer details in future updates.

Here we have a comparison table that shows some of the coins offered for both. These are not extensive since the Ledger allows even greater access through the app Myetherwallet:

Again, both wallets are easy to set up. Both require a micro USB and a pin code plus a recovery set of seed phrases.

Both are secured by a minicomputer system or set of chips.

Software Compatibility for each  wallet is slightly different:

For the Ledger Nano S:

same as above except for

the Multi Bit and the Ledger Chrome instead

Ledger vs Keepkey: the Winner

The winner between Ledger vs Keepkey, in my opinion, is the Ledger. The Ledger Nano S allows even more access to different coins than what is shown in the above table, all through a separate app known as Myetherwallet. The Ledger will allow more direct access to altcoins in a later update through the Ledger Live Manager. The Leger Nano S is cheaper, easier to store, has more software that it’s compatible with, and stores more coins. The Ledger Nano S is a top favorite because it is well known in the industry followed by the Trezor. Ledger also has simplified things by integrating its app Ledger Manager with a more inclusive app, Ledger Live.

Until Keepkey catches up to the number of coins offered it’s going to fall behind those who are interested in the altcoin markets. The Alt coin markets will grow because they provide utility whereas some of the other coins like bitcoin don’t. There will come a time when utility coins such as XRP will surpass Bitcoin.

Despite what some may think, institutional money will salivate at the feet of XRP and only pay homage to Bitcoin. It’s better to own a wallet that accounts for this competition and allows XRP deposits and withdrawals. The Ledger allows both.

For those interested in a larger more easily viewed screen with less emphasis on alt coins, the Keepkey will be the way to go.

The choice of a hardware wallet is up to you, but you should be safe with either of these just reviewed. The Ledger and Keepkey are both excellently designed and account for many of the sales of hardware wallets. The Trezor ranks up there as well, but I leave that for another review.

If you have any questions please ask under the comments below.

The above chart shows that the storage of many coins is available. If you’re interested in buying either the Ledger Nano S or Keepkey, please try my affiliate links below:

The previous article was a review of products of which I am genuinely very supportive. I may receive compensation if you click on any of the Ledger Nano or Keepkey links.

PLEASE SHARE AND CONSIDER PURCHASING A WALLET FROM ONE OF MY AFFILIATE LINKS BELOW, THANK YOU:

Dec 13, 2017 … So I received my Keepkey about a month ago and I quickly added my coins. That’s when I hit the wall that most Keepkey owners do.. The lack of coin support, but more on that later….